The regions of Labrador may differ in the ways they produce and sell crafts, but we share an interest in handmade work and Labrador traditions. Labrador is known as “The Big Land”. Geography affects the way we work together, and the social, economic and cultural patterns of Labrador as a whole.

Central Labrador hosts the Labrador Traditions Christmas Craft Fair, the most important and successful sales event for many producers in Central Labrador. The fair attracts participants from outside the region as well. A volunteer committee organizes the event on an annual basis.

Happy Valley-Goose Bay has a large art and craft community including knitters, carvers, doll makers, grass sewers and visual artists. There are several groups of quilters, a number of duffel and hide workers and interest in rug hooking. There are also a number of sewers working in canvas. The Community Youth Network, Labrador Friendship Centre, and Aboriginal groups are ensuring that crafts tradition is being passed down. Craft shops in Happy Valley-Goose Bay offer both raw materials and a wide variety of quality crafts.

North West River has an active craft community with many volunteers who manage the Labrador Heritage Society Craft Shop. The community has a long history and tradition of craft production including duffel slippers, grasswork and beading — skills that can be passed onto younger generations. Producers also sell in Happy Valley-Goose Bay. Several producers utilize ‘found’ objects from nature, such as driftwood, feathers and antlers in their craft products, a practice called wildcrafting. The Labrador Heritage Society Craft Shop is recognized as contributing to the success of the crafts industry in the community. Nunatsiavut is making efforts to keep traditional crafts alive, teaching youth groups in sealskin craft.

Each year, the Band Council sponsors a work/craft training initiative for both men and women for several weeks. Training has included production of canvas coats, canoes, snow shoes, tea dolls, sewing, quilting, beading, moose hide and caribou hide mitts and slippers, and tools. Materials are supplied and participants share or sell the things they make. In addition to these classes, many people still learn crafts from their families and friends. Young people are interested in learning traditional craft skills such as canoe making.

Producers in Sheshatshiu and Natuashish sell by word of mouth and Facebook. They also sell at annual festivals and social gatherings in Sheshatshiu, Natuashish and Innu communities in Quebec. One or two women who make tea dolls sell to buyers in shops and galleries elsewhere.

Torngat Arts and Crafts is a non-profit organization, and a co-operating association with Parks Canada (also known as a “friends-of-the-park group”) in support of Torngat Mountains National Park. They will be housed in the new Torngâsok Cultural Centre when it is completed in 2016. They introduce visitors to Nunatsiavut and Inuit culture through locally-produced crafts and art and by creating opportunities to meet artists and local experts. Torngat Arts and Crafts provides opportunities for Inuit to participate in the economic growth associated with the Park, creating employment in the craft shop and through arts and crafts production.

With full respect for the environment, knowledge of traditional medicines and practices, and a care for each other that can be traced directly to local aboriginal heritage, NunatuKavut strives to achieve certainty and stability for the social, cultural and economic quality of life for their people and communities.

Preserving and sharing cultural knowledge is an area of work that crosses all aspects of NuntuKavut’s operation.Its work toward developing and maintaining the traditional crafts of the Southern Inuit is primarily focused toward the following aims:

Southern Labrador has a long history of craft production, from family necessity, to participation in Grenfell mission activities, to the present day tourism industry.

Labrador Straits communities have a variety of groups and businesses engaged in craft activities. The Women’s Institute has operated the Labrador Straits Museum and Craft Shop since the late 1970s and now operates the craft shop at Red Bay UNESCO World Heritage Site. The Southern Labrador Development Association has hosted the Labrador Straits Craft and Agriculture Fair for over a decade and has been instrumental in bringing craft training workshops to the region. The Quebec Labrador Foundation is active in traditional skills initiatives. There is no regional craft structure, but there has always been collaboration among the community groups. The craft community includes rug hookers, jewellery makers, visual artists, knitters, quilters and woodworkers. There are fewer producers making traditional crafts such as hide slippers, duffel work, and sealskin boots, but there is a strong interest in learning these traditional skills.

Southeastern Labrador has a strong interest and long history of craft making. Many women knit for NONIA over the years and Black Tickle and St Lewis have recently had training initiatives in duffel work and jewellery making. There are craft shops at Battle Harbour Historic Site and Cartwright. The shop in Cartwright offers craft making experiences to visitors.

In Southern Labrador, traditional skills are being passed on to young people through programs sponsored by NunatuKavut, the Junior Rangers and the Community Youth Network. Experienced craft producers have worked with youth to make slippers, sealskin mitts, komatiks and other traditional and survival crafts.

Western Labrador has an active volunteer Craft Guild which hosts a large annual sale as well as training events. There are several private craft outlets and entrepreneurs.

The Labrador Craft Guild was started in the 1960s and plays a significant role in encouraging producers, providing training, promoting crafts and providing a venue for sales. Training in courses organized by the Guild include quilting and contemporary crafts and there is strong interest in learning traditional Labrador crafts.

Churchill Falls has an active craft group, Churchill Falls Arts & Crafts, that meets weekly and hosts training workshops. You can find them on Facebook. 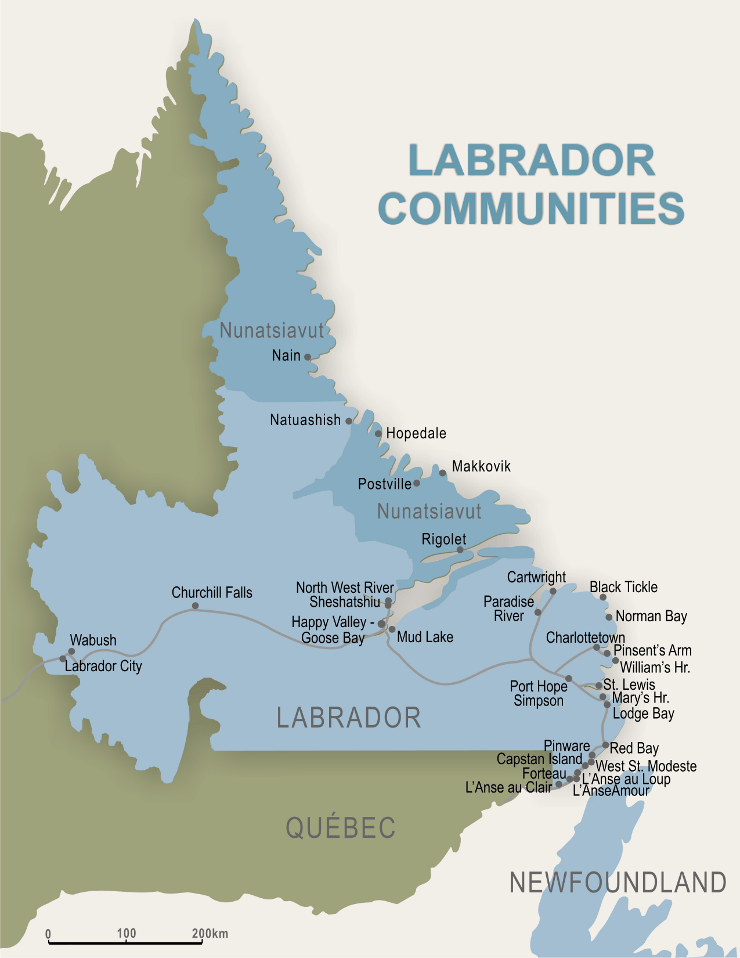